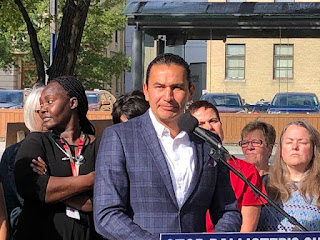 On a day when the Manitoba NDP could have crowed loud and long about the Pallister PC's re-upping on an MLA who cracked unwanted juvenile 'beaver' jokes to his constituency assistant, party leader Wab Kinew took the wind out of his party's sails before the evening newscasts with a new set of 'woman problems'. The day started with reports that Progressive Conservative MLA Rick Wowchuk, running for re-election in Swan River, had violated Manitoba Legislative Assembly workplace policy 5 times, including showing a former constituency assistant a picture of naked women on his cellphone in 2016.

“I unfortunately made comments and shared an email that caused offence,” Wowchuk said in his statement. “I deeply regret doing so and I have taken full responsibility for my actions." He added he found the workplace sensitivity training he was required to attend, "extremely valuable".

Despite his transgressions, and the long list of complaints that didn't register as technical breaches of the workplace protocols about sexism and harassment, Brian Pallister signed his nomination papers. 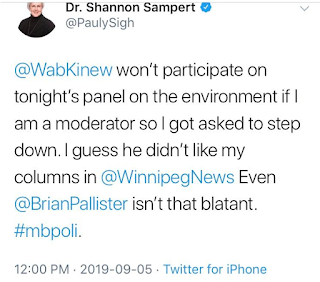 But even as that sordid story emerged Thursday morning, Kinew had already greased the skids underneath his party with his not-an-ultimatum to a town hall on environmental issues scheduled for the evening. And the target of his ire, Winnipeg Free Press columnist Shannon Sampert made sure everyone knew the score.

"Wab Kinew won't participate on tonight panel on the environment if I am a moderator so I got asked to step down" she told everyone on Twitter at noon. "I guess he didn't like my columns."


Sampert, a retired political science professor at the University of Winnipeg, was one of 3 moderators for the Hotel Fort Garry event and was replaced by Molly McCracken of the "non-partisan" Canadian Centre for Policy Alternatives. The west end activist has held many NDP-connected jobs this century, including with the Selinger government as a Health Policy analyst.


It quicky emerged that Sampert wasn't the first woman that Kinew refused to be questioned by.

APTN news host Melissa Ridgen piped up that Kinew had pulled the same stunt over a planned sit-down TV interview.


"Wab Kinew also wouldn't do a sit-down interview with APTN National News this summer unless we guaranteed it was a man asking the questions.

Now he refused to attend an environmental forum unless the female moderator was removed."

Both Sampert and Ridgen have been pointed critics of Kinew's nuanced denial he had assaulted then-spouse Tara Hart in 2003, and have assailed his attempt to straddle the line on whether victims of domestic violence are to be believed, or just those who don't name him as their abuser. 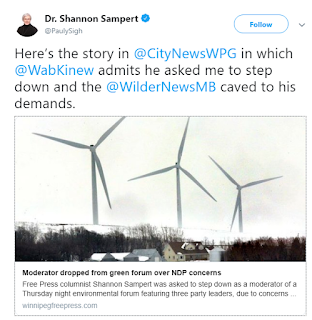 Given that a police report was filed and 2 charges were laid against Kinew- and then dropped without Hart's knowledge - he has never been able to shake the controversy.

Sampert has roasted Kinew and the NDP for various offensive attitudes and behaviors towards women staffers and party members, including the antics of "Minister Tickles" Stan Struthers and she called the party a dumpster fire in a 2018 column entitled "Women deserve better than the current NDP."

Sampert has now set her Twitter account to private. By the time she did, there was already significant backlash online towards Kinew - and to the organizers of the panel including the Green Action Centre, Bike Winnipeg and the Manitoba Public Health Association for bending to his demands.

"NDP Leader Wab Kinew and Eric Reder, one of the forum’s organizers with the Wilderness Committee, acknowledged there were conversations between the party and organizers about her role."

"The decision is up to the organizer as to who they want to host their event," Kinew said
Reder said it was "unfortunate" the organization had to decide on the event day to ask Sampert to step down ... "It’s crucial that the candidates that are vying to lead the province speak about the environment and the climate crisis in public as much as possible, so when an issue arose... we had to make a decision (Thursday) morning."
Sampert told the newspaper "I am stunned by this ... This is payback for my column on his domestic violence history and his misogyny, and clearly, he still has a problem with women."
**********
Kinew decided he was going to pick and choose which women journalists he would take questions from during the election, which a well-known University academic called "no surprise to those of us who have followed his career".
"Kinew objected to Ridgen conducting the interview, likely for the same reasons he objected to Sampert: both journalists had done superb, highly critical pieces on Kinew's history of violence, misogyny, and sexism." he wrote in a social media dialogue involving Ridgen.

"Kinew's demand to control the media displays a nasty streak of authoritarianism, which comes as no surprise to those of us who have followed his career (and observed him at close quarters during his time as -- and this still sticks in my craw -- university administrator, a position created for him by his patron Lloyd Axworthy and for which he was unqualified)."
He added "but there is enough blame left over for the eco-forum organizers who should have told Kinew to go f*ck himself and that the forum would go ahead with or without him."
*********** 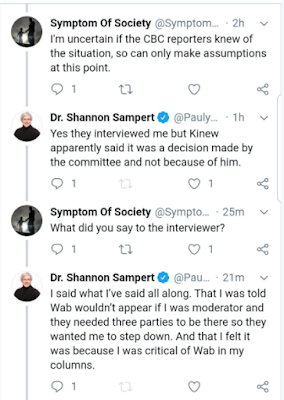 CBC Radio managed to completely dodge the controversy on Friday morning while interviewing Kinew on-air and also in getting a comment from Reder.
Not only did CBC earn an F to start the new j-school year, they earned an extra F for avoiding the issue DESPITE having also spoken with Sampert beforehand.
CBC knew they were favouring their former newsroom colleague by giving him the softball treatment. Sampert had told them her side:
"Kinew apparently said it was a decision made by the committee and not because of him... I was told Wab wouldn't appear if I was moderator and they needed three parties to be there so they wanted me to step down." 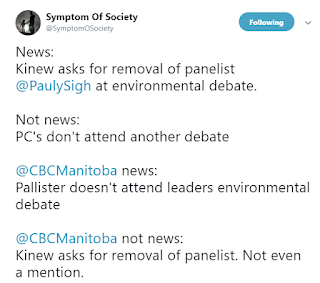 A recent Probe Research poll found an astonishing lack of confidence in Kinew, even with his own Party supporters: A fifth said assault allegations made them lose confidence in him, with it doubling to 41 per cent between 18-34 years of age. Four out of ten poll respondents said allegations of Kinew committing assault (he was convicted of punching a cabbie) prevent them from voting NDP.
Now FN and eco-voters - whose journalists he shunned - may well be revising the prospects of their own support for Kinew.
***********
More election coverage still to come: 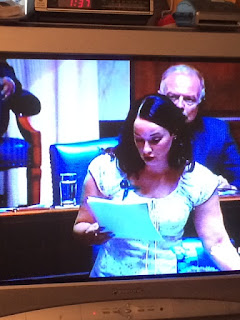 - Video of Liberal leader Dougald Lamont commenting about Nahanni Fontaine's undisclosed court garnishee and Pallister's caucus bad boys
- Wab Kinew meth policy drops the (used needle) ball
- Two PC candidates agree with Marion Willis and Morberg House, that 800 Adele should be looked at a drug detox facility despite a contract dispute with the building owners and a pending court case against the government.
This is the only independent election coverage in Manitoba - going to press conferences and town halls, following up on tips, asking questions... you can help keep it going with the expenses by becoming a donor!
Please learn how by clicking here.
at September 06, 2019